It’s sad because even in this modern day, the world is still full of pessimistic and judgmental people. Some people are focused in criticizing than appreciating what’s good to others.

Just like what happened to him. He was judged according to his looks. This man was mistaken as homeless who can’t even pay his fare. He was also repeatedly ignored and hurtfully mocked by passengers.

Ruben Madridejos remained calm and humble even got ignored by jeepney drivers and mocked by passengers where he rode.


Sir Ruben Madridejos or Sir Madri is actually a professor at the Department of Physical Sciences, College of Science in the Polytechnic University of the Philippines (PUP).

Professor Ruben is a simple person yet genius and a physics master who like to wear ordinary clothes and puts his belongings in a plastic bag or small sack which made him looked-like a homeless man.

During his education, he attained his college degree with flying colors from University of the Philippines way back 1973 and got his Master of Science in Geophysics title in Germany through state funded scholarship.


Kudos to Mr. Madridejos for being like a low profile despite of all his achievements! 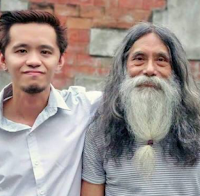